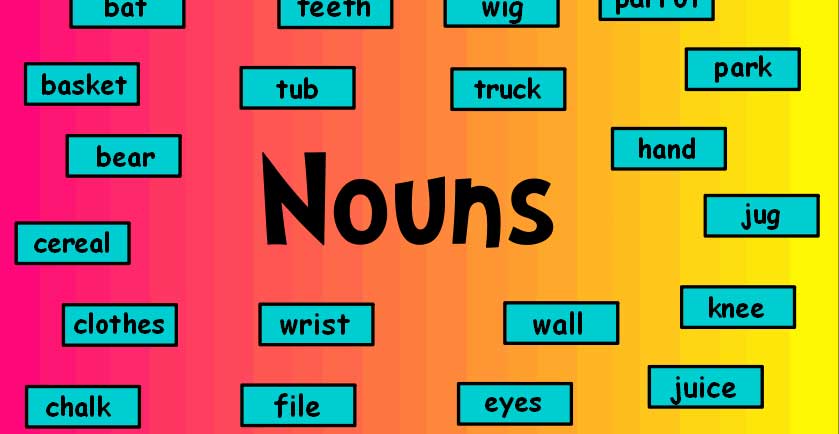 Nouns are commonly thought of as “naming” words, and specifically as the names of “people, places, or things“. Nouns such as John, London, and computer certainly fit this description, but the class of nouns is much broader than this. Nouns also denote abstract and intangible concepts such as birth, happiness, evolution, technology, management, imagination, revenge, politics, hope, cookery, sport, literacy….

Because of this enormous diversity of reference, it is not very useful to study nouns solely in terms of their meaning. It is much more fruitful to consider them from the point of view of their formal characteristics.

Many nouns can be recognised by their endings. Typical noun endings include:

Most nouns have distinctive SINGULAR and PLURAL forms. The plural of regular nouns is formed by adding -s to the singular:

However, there are many irregular nouns which do not form the plural in this way:

The distinction between singular and plural is known as NUMBER CONTRAST.

We can recognise many nouns because they often have the, a, or an in front of them:

the car
an artist
a surprise
the egg
a review

These words are called determiners, which is the next word class we will look at.

Nouns may take an -‘s (“apostrophe s“) or GENITIVE MARKER to indicate possession:

If the noun already has an -s ending to mark the plural, then the genitive marker appears only as an apostrophe after the plural form:

the boys’ pens
the spiders’ webs
the Browns’ house

The genitive marker should not be confused with the ‘s form of contracted verbs, as in John’s a good boy (= John is a good boy).

Nouns often co-occur without a genitive marker between them:

We will look at these in more detail later, when we discuss noun phrases.

Nouns which name specific people or places are known as PROPER NOUNS.

Many names consist of more than one word:

Proper nouns may also refer to times or to dates in the calendar:

All other nouns are COMMON NOUNS.

Since proper nouns usually refer to something or someone unique, they do not normally take plurals. However, they may do so, especially when number is being specifically referred to:

There are three Davids in my class.
We met two Christmases ago.

For the same reason, names of people and places are not normally preceded by determiners the or a/an, though they can be in certain circumstances:

Common nouns are either count or non-count. COUNT nouns can be “counted”, as follows:

NON-COUNT nouns, on the other hand, cannot be counted in this way:

It also means that non-count nouns do not take a/an before them:

In general, non-count nouns are considered to refer to indivisible wholes. For this reason, they are sometimes called MASS nouns.

Some common nouns may be either count or non-count, depending on the kind of reference they have. For example, in I made a cake, cake is a count noun, and the a before it indicates singular number. However, in I like cake, the reference is less specific. It refers to “cake in general”, and so cake is non-count in this sentence.