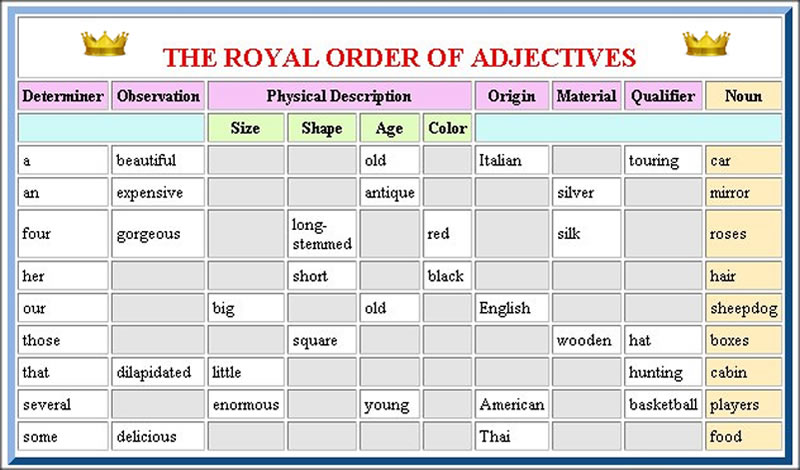 When two or more adjectives come before a noun, their relative order is fixed to a certain degree. This means, for instance, that while complex mathematical studies is grammatically acceptable, mathematical complex studies is less so. Similarly:

Here we will discuss some of the most common sequences which occur, though these should not be seen as ordering rules. Counter examples can often be found quite easily.

Central adjectives, as we saw earlier, are adjectives which fulfil all the criteria for the adjective class. In this sense, they are more “adjectival” than, say, denominal adjectives, which also have some of the properties of nouns.

This is the ordering found in complex mathematical studies, for instance, and also in the following examples:

and before denominal adjectives:

(1) – (4) account for many sequences of up to three adjectives, in which each adjective is a different type. In practice it is rare to find more than three attributive adjectives together, especially if they are all different types. However, such a sequence may occur:

Here the sequence is:

Non-gradable adjectives, in fact, are always first in an adjective sequence. Here are some more examples:

So far we have looked at sequences in which each adjective is a different type. However, we very often find adjectives of the same type occurring together:

Here all the adjectives are central adjectives, and in sequences like these it is much more difficult to determine the general principles governing their order. Several schemes have been proposed, though none is completely satisfactory or comprehensive.

The ordering of adjectives is influenced to some degree by the presence of premodification. If one or more of the adjectives in a sequence is premodified, say, by very, then it generally comes at the start of the sequence.

It would be unusual, perhaps, to find very accurate elsewhere in this sequence:

?The laryngograph provides us with a non-invasive very accurate physical measure of voice

?The laryngograph provides us with a non-invasive physical very accurate measure of voice

Conversely, adjective order restricts the degree to which attributive adjectives may be premodified. Consider the following:

We cannot modify young in this example, while keeping wealthy and young in the same relative order:

Nor can we move young to the first position and modify it there, while retaining the same degree of acceptability: