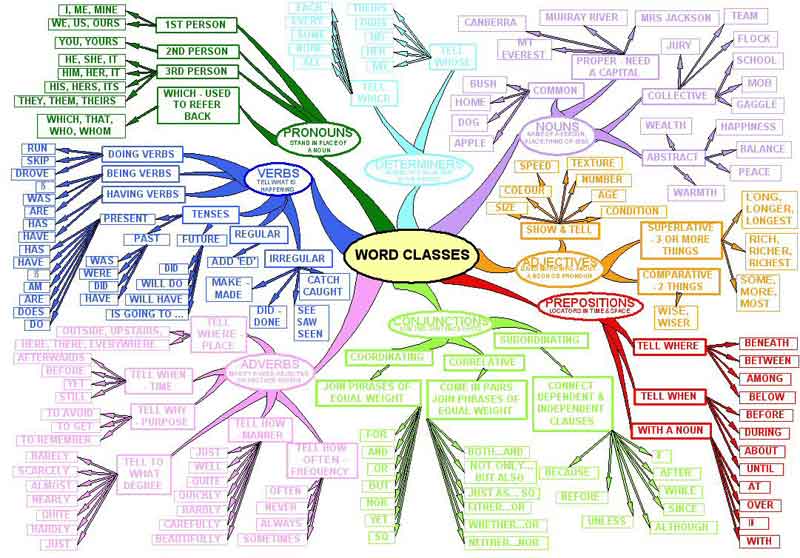 Words are fundamental units in every sentence, so we will begin by looking at these. Consider the words in the following sentence:

My brother drives a big car.

You may find that other grammars recognize different word classes from the ones listed here. They may also define the boundaries between the classes in different ways. In some grammars, for instance, pronouns are treated as a separate word class, whereas we treat them as a subclass of nouns. A difference like this should not cause confusion. Instead, it highlights an important principle in grammar, known as GRADIANCE. This refers to the fact that the boundaries between the word classes are not absolutely fixed. Many word classes share characteristics with others, and there is considerable overlap between some of the classes. In other words, the boundaries are “fuzzy”, so different grammars draw them in different places.

We began by grouping words more or less on the basis of our instincts about English. We somehow “feel” that brother and car belong to the same class, and that brother and drives belong to different classes. However, in order to conduct an informed study of grammar, we need a much more reliable and more systematic method than this for distinguishing between word classes.

We use a combination of three criteria for determining the word class of a word:

Using this criterion, we generalize about the kind of meanings that words convey. For example, we could group together the words brother and car, as well as David, house, and London, on the basis that they all refer to people, places, or things. In fact, this has traditionally been a popular approach to determining members of the class of nouns. It has also been applied to verbs, by saying that they denote some kind of “action”, like cook, drive, eat, run, shout, walk.

This approach has certain merits, since it allows us to determine word classes by replacing words in a sentence with words of “similar” meaning. For instance, in the sentence My son cooks dinner every Sunday, we can replace the verb cooks with other “action” words:

On the basis of this replacement test, we can conclude that all of these words belong to the same class, that of “action” words, or verbs.

However, this approach also has some serious limitations. The definition of a noun as a word denoting a person, place, or thing, is wholly inadequate, since it excludes abstract nouns such as time, imagination, repetition, wisdom, and chance. Similarly, to say that verbs are “action” words excludes a verb like be, as in I want to be happy. What “action” does be refer to here? So although this criterion has a certain validity when applied to some words, we need other, more stringent criteria as well.

The form or “shape” of a word

Some words can be assigned to a word class on the basis of their form or “shape”. For example, many nouns have a characteristic -tion ending:

Similarly, many adjectives end in -able or -ible:

Many words also take what are called INFLECTIONS, that is, regular changes in their form under certain conditions. For example, nouns can take a plural inflection, usually by adding an -s at the end:

The position or `environment’ of a word in a sentence

The cooks are on holiday

If we really need to, we can also apply a replacement test, based on our first criterion, replacing cook in each sentence with “similar” words:

*I chef dinner every Sunday
*The eat is on holiday

It should be clear from this discussion that there is no one-to-one relation between words and their classes. Cook can be a verb or a noun — it all depends on how the word is used. In fact, many words can belong to more than one word class. Here are some more examples:

You will see here that each italicised word can belong to more than one word class. However, they only belong to one word class at a time, depending on how they are used. So it is quite wrong to say, for example, “cook is a verb”. Instead, we have to say something like “cook is a verb in the sentence I cook dinner every Sunday, but it is a noun in The cook is on holiday“.

Of the three criteria for word classes that we have discussed here, the Internet Grammar will emphasise the second and third – the form of words, and how they are positioned or how they function in sentences.

Some word classes are OPEN, that is, new words can be added to the class as the need arises. The class of nouns, for instance, is potentially infinite, since it is continually being expanded as new scientific discoveries are made, new products are developed, and new ideas are explored. In the late twentieth century, for example, developments in computer technology have given rise to many new nouns:

New verbs have also been introduced:

The adjective and adverb classes can also be expanded by the addition of new words, though less prolifically.

On the other hand, we never invent new prepositions, determiners, or conjunctions. These classes include words like of, the, and but. They are called CLOSED word classes because they are made up of finite sets of words which are never expanded (though their members may change their spelling, for example, over long periods of time). The subclass of pronouns, within the open noun class, is also closed.

In the pages which follow, we will look in detail at each of the seven major word classes.