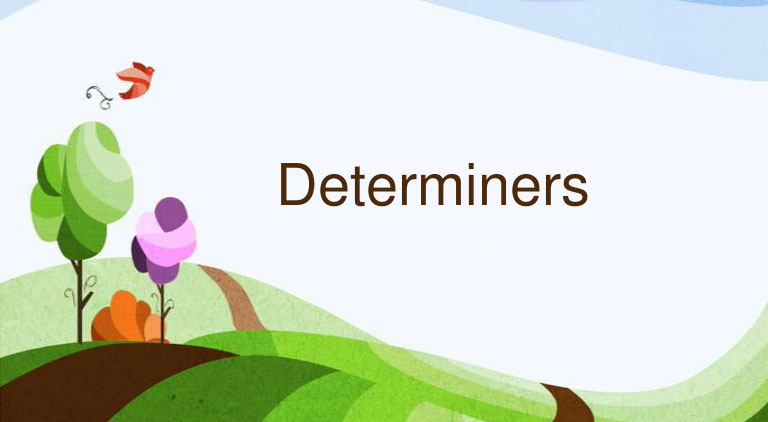 Nouns are often preceded by the words the, a, or an. These words are called DETERMINERS. They indicate the kind of reference which the noun has. The determiner the is known as the DEFINITE ARTICLE. It is used before both singular and plural nouns:

The determiner a (or an, when the following noun begins with a vowel) is the INDEFINITE ARTICLE. It is used when the noun is singular:

a taxi
a paper
an apple

The articles the and a/an are the most common determiners, but there are many others:

Perhaps the most common way to express quantity is to use a numeral. We look at numerals as determiners in the next section.

Numerals are determiners when they appear before a noun. In this position, cardinal numerals express quantity:

The subclass of ordinals includes a set of words which are not directly related to numbers (as first is related to one, second is related to two, etc). These are called general ordinals, and they include last, latter, next, previous, and subsequent. These words also function as determiners:

When they do not come before a noun, as we’ve already seen, numerals are a subclass of nouns. And like nouns, they can take determiners:

the two of us
the first of many

They can even have numerals as determiners before them:

In this example, twos is a plural noun and it has the determiner five before it.

There is considerable overlap between the determiner class and the subclass of pronouns. Many words can be both:

As this table shows, determiners always come before a noun, but pronouns are more independent than this. They function in much the same way as nouns, and they can be replaced by nouns in the sentences above:

On the other hand, when these words are determiners, they cannot be replaced by nouns:

The personal pronouns (I, you, he, etc) cannot be determiners. This is also true of the possessive pronouns (mine, yours, his/hers, ours, and theirs). However, these pronouns do have corresponding forms which are determiners:

The definite and the indefinite articles can never be pronouns. They are always determiners.

The Ordering of Determiners

Determiners occur before nouns, and they indicate the kind of reference which the nouns have. Depending on their relative position before a noun, we distinguish three classes of determiners.

A sentence like this is somewhat unusual, because it is rare for all three determiner slots to be filled in the same sentence. Generally, only one or two slots are filled.

Predeterminers specify quantity in the noun which follows them, and they are of three major types:

half my salary
one-third my salary

all my salary
both my salaries

Predeterminers do not normally co-occur:

*all half my salary

all the book
half a chapter

As many of our previous examples show, the word my can also occupy the central determiner slot. This is equally true of the other possessives:

The demonstratives, too, are central determiners:

all these problems
twice that size
four times this amount

the two children
his fourth birthday

This applies also to general ordinals:

Other quantifying expressions are also post-determiners:

my next two projects
several other people